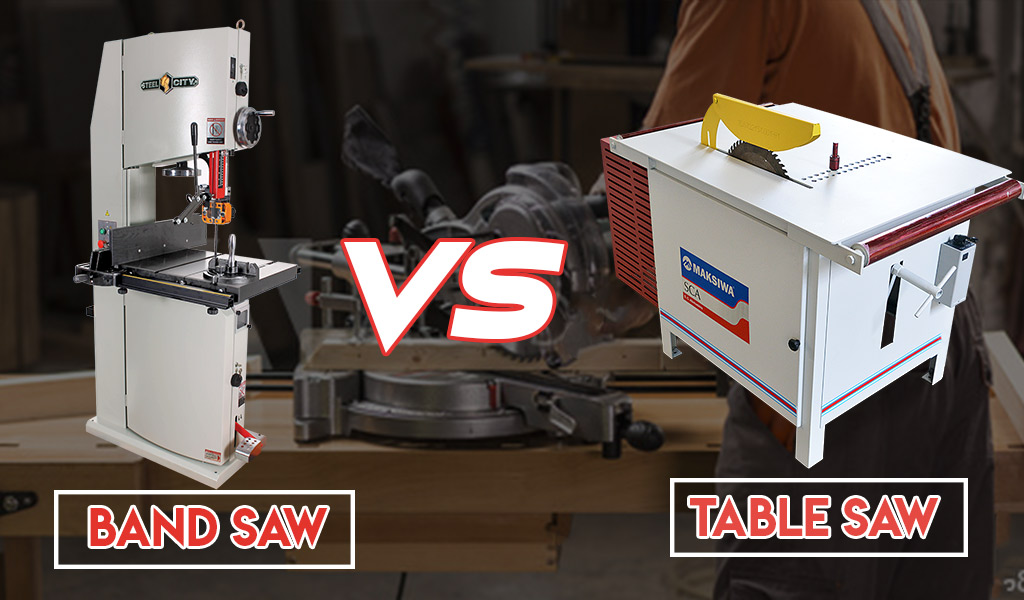 The band and the table saw are practical tools that you can hardly miss in any hobby shops and garages around the world.

What makes the two differ from each other? What are applications of each? Do they do the same work? Which one is affordable?

To better have answers to these questions, read this article to the end.

Well, without squandering of time, let us directly jump into it.

What Are The Band Saws?

Band saws are saws of flexible metal in the form of a strip, looped into a circle and arranged around a rotating device so that the band saw rotates at a very high speed when the machine is switched on.

The band saw is a common type of sawing machine for cutting metals in garages. It’s faster and easier to use than table saws. It allows you to create the shapes you cannot do with the table saw accurately.

Applications of A Band Saw

A band saw has a metal blade with teeth that cuts through different types of workpieces. These saws are ideal for woodworking, metalworking and cutting anything you can imagine.

For people who do metalworking, band saws are a necessary tool. These saws are available both horizontally and vertically. Your band saw will be able to cut many types of metals.

Let us look at its counterparts.

What Is A Table Saw?

The table saw is a wood cutting tool known for its versatility. It consists of a sharp circular blade, which is attached to an electric motor and rests on a table. There are prefabricated groves in which the blade turns.

The material to be cut is worked around the blade. The table provides stable support during the cutting process. It is important to repair it on the ground to avoid kickback and vibration. It can cut metal, wood or plastic.

Applications of The Table Saw

In any wood workshop, the table saw can be regarded as a powerhouse due to its versatility and performance over other woodworking tools.

The table saw can be used to cut ribs, cross sections, square and foldable miter cuts, and even make shapes into the edge of the wood material.

What Are Their Differences?

Well, if you have been wondering which to buy between the table and band saw, the below differences will influence your decision significantly. Let us see.

As we all know that both the band and table saw are versatile tools, their versatility can only be measured in different applications.

However, the band saw not only will be able to cut wood but also can be used to cut metal, plastic or meat without interfering with its blade. This is one of the advantages that a table saw cannot guarantee.

The table saw will work perfectly on wood, but not ideal for plastic or metal.  Its blades can be damaged when applied to cut or work on metal and plastic.

The table saw produces too much noise compared to the band saw. To lower the noise, blade stabilizers can be employed, and emitted noise will be under control.

Band saw is much safer than the table saw. The table saw can kickback the material, although it is an infrequent problem. On the other hand, the band saw cuts down, so the kickback problem does not occur in the band saw.

But because it is also a type of saw, we can’t say that it is safe 100%. Every saw has its operational risks. They are only safe when not in operation, but one switched on; the risk factor comes into action. If you apply safety measures and work carefully, it will not have any safety comparison to use a banded table saw.

The table saw costs higher than the hand saw. With a cheap band saw, you can continue your work safely and accurately. But if you buy a cheap table saw, you will have a lot of problems using it.

You must be more careful when using a cheap table saw. If the price is one of the primary considerations, it is better to choose the band of a saw.

Below find some common questions that we have responded to concerning the difference between these two types of saws.

Which one is more dangerous and why?

The table saw is risk compared to the band saw. In the table saw more material passes the blade and increases the chance of a kickback. However, it is much safer when cross-cutting using a sled.

So which should I buy first?

Each one of them is just important. However, the table saw is an essential tool that you should not miss in any workshop. You can run your business without a band saw. Furthermore, most of the things then can be accomplished by a band saw so they can be with a hand saw, or a chopper saw

When should I use the band saw instead of the table saw?

If you work mainly with plywood and custom wood, the table saw will probably be more useful. If you do more work with rough timber that needs to be reworked, or if you do a lot of curved cuts, then the band saw could be more useful.

Keep in mind that the table saw equipped with the right blade leaves a more beautiful, flatter cut surface than the band saw.

If you want to start a wood and metal workshop and now thinking whether to choose table saw, or a band saw, you should first go for a table saw for all your great purposes.

This does not imply that the table saw is much more useful than a hand saw. There are some circumstances which hand saw is the ideal candidate. They are more of speciality.