You are here: Home / Blog / Differences Between Heat Gun and Hair Dryer 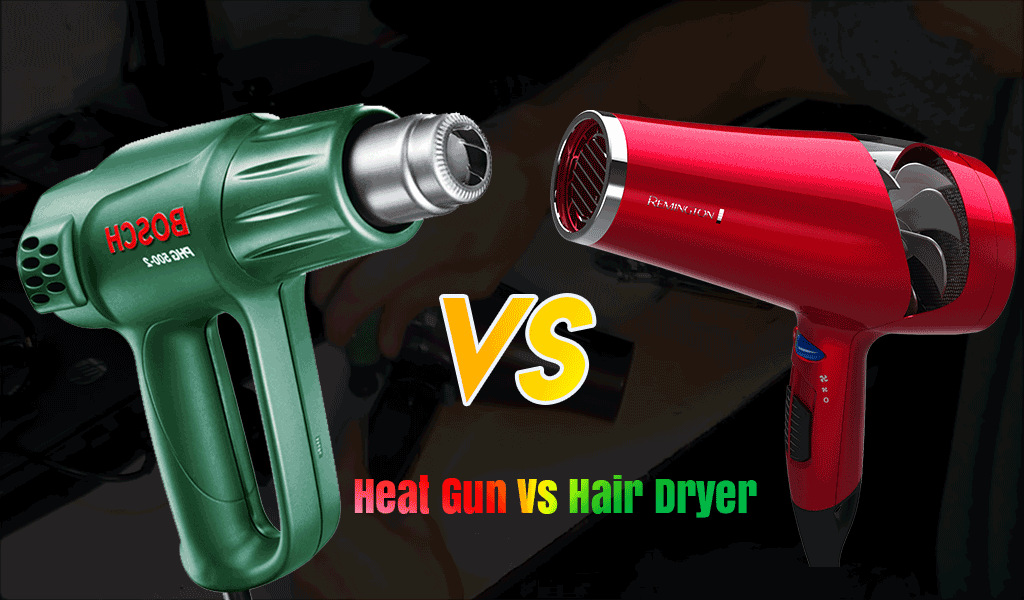 Surprisingly heat gun and hair dryer work in the same way, but the final output is different. Both have a heating coil and a fan inside the frame where a universal motor powers the fan. The fan produces air flow by connecting through the electricity. However, the coil determines the hot or warm air which differentiates the machine as a hair dryer or as a heat gun.

However, not only the output but also they have other odds to describe. So, in this article, you’ll know the differences between their activities.

More than that, most of the latest designed heat guns come with LCD. It displays the temperature it reaches. So, you needn’t touch to the working surface to know the heat which is also dangerous. Even, you can burn your finger to check the temperature. Also, you can set the required temperature on the LCD.

Hair dryer works like heat gun and blows warm air. Both the design is the same as the final output. But, the temperature of the air blown by hair dryer is quite lower than that of a heat gun. It can’t burn the surface for regular uses. But, if you apply the hair dryer on a surface for a long time, the surface will be burnt.

As it is mentioned above that, both hair dryer and heat gun work similarly, so, what the difference among them is. Even, many of us also think them similar as they both blow warm air.

However, isn’t there any difference among them? If it is, what is it?

Reaching high temperature is the main difference between a hair dryer and a heat gun. A hairdryer is an electro mechanical device that is used to dry hair after a shower. It gives off the air to accelerate the evaporation of the water from the hair. It can reach up to 131-degree Fahrenheit which enables to dry the hair. However, the temperature can burn the skin but not enough to accomplish many other high temperature required tasks.

As the hair dryer is designed to give off warm air, it works well too evaporate water from the hair. It also allows styling the hair as evaporation is completed quickly. So, almost all saloon and hair styling boutiques use a hair dryer to style the hair. They can shape the hair in any style by a temporary hydrogen bond after a wash. Also, a hair dryer can be used for crafting as crafting requires little temperature. But, it requires a lot of time to decorate the candles. You may need to spend for hours to wax the candle.

On the contrary, heat guns have different applications in all areas of science. It depends on the required temperature of the task. The gun blows air as it is directed. But the most common use is to strip the pain. It is also popularly used in attaching metals using oxy-acetylene ray.

Hair dryer isn’t a massive tool as it is handled by a single hand. So, it is made of plastic with ceramic heating elements. The ceramic provides the capability of reaching a required temperature within a possible short time. The coil inside the dryer powered by a universal motor has high electric resistance. So, the device can’t get overheated. As the device is run by electricity, it needs to be cool as soon as possible. Thus, the latest ionic technologies are used in the hair dryer which reduces static electricity and makes it smoother.

A heat gun is an excellent source of high temperature. So, it is made up such elements which can protect it from burning with high temperature. It comes with a nozzle that directs the hot temperature to a specific object or surface. Also, the electric fan and gas flame inside the device control the temperature. Moreover, many guns come with a trigger that is used to power ON or OFF the machine. It also comes with an external stand which allows the user to keep it when it is unused.

Safety is the prime concern while using electric devices. A hair dryer is less dangerous than a heat gun because of the less temperature. However, as both produce hot air, any unconsciousness may result in a perilous moment.

So, concentrate on the task while using to devices. It helps to avoid any unexpected circumstances.

Though you can use a hair dryer instead of a heat gun which is not appropriate, the devices have specific tasks to be done. Any exception in using the tool may destroy the entire project, as well as your endeavor, will go in vain.

The typical jobs that require a heat gun

The DIY tips that require a Hair Dryer

Here are some creative ways to use a hairdryer: