You are here: Home / Blog / Hammer Drill vs. Impact Driver| What about their differences? 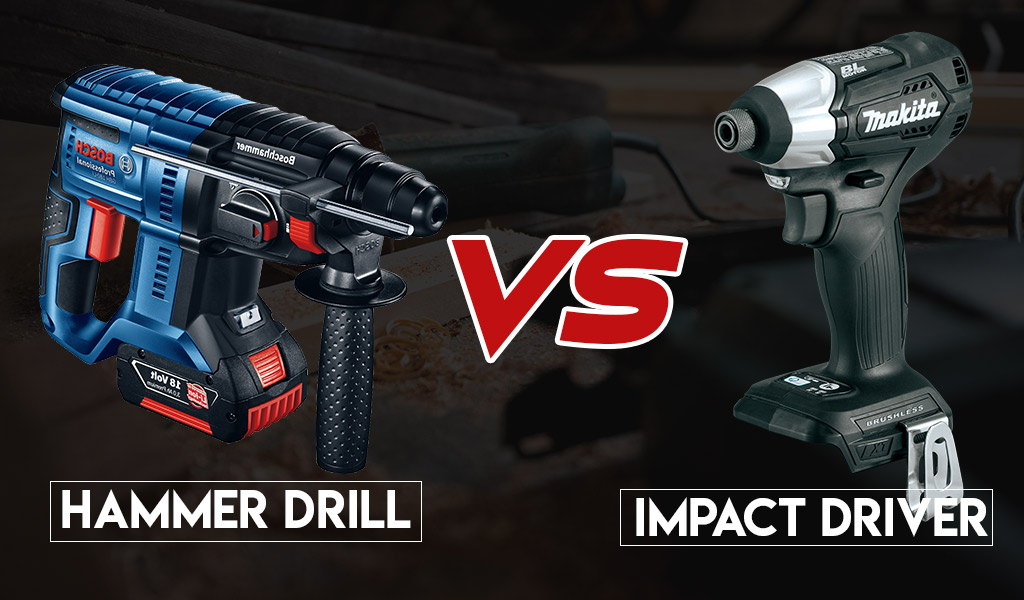 Do you have a construction task and now thinking about what tools to gather?  Do you know that hammer drill and impact drive plays essential roles at the construction site?

Many do not know what they are and get confused on which one to buy first. However, these tools are convenient and will serve different purposes during your construction task.

To help you choose the right tool among these two for your construction task, we have highlighted some of their differences and application areas.

What is a hammer drill?

Most hammer drills usually come as lower power units and are suitable for small drilling tasks. The higher power units commonly known as rotary hammers are used to provide much higher impact forces.

However, to apply a drill is no joke. A hammer drill has some force, and it takes power to operate and control it.

Typically, you must apply a constant pressure to guide it through the pulverized material. It is essential to make sure that your drill has the right and high-quality drill bit.

The drills are very powerful and fast whole makers. They either come as corded or cordless. Herein, the cordless comes with an inbuilt rechargeable battery.

The corded one which depends on electricity to work is much more powerful and is used on construction sites more preferably. Battery powered hammer drills will just do the task that can be performed by their counterparts. However, they will require time to time recharging.

Some of the applications of hammer drills

Installing outdoor lighting, hanging outdoor art objects, and attaching flagpole hangers to bricks, cement concrete, tiles or furniture are common household projects that require the use of a hammer driller.

Using a hammer driller does not require professionalism, and if you are experienced enough to undertake the work by yourself, it is vital that you familiarize yourself with electrical wiring before drilling or making holes through the wall of your home.

Regardless of the work to be done, even if it is small, for example; hanging a towel holder with a pilot hole and fasteners and there is a need for a drill, a hammer drill is required.

A hammer drill works in hand with an impact driver. After making drills, it will then be time to fit them with nuts and bolts and an impact driver can be deployed to drive in the screws.

In the below section, we look at this impact driver and all about it.

What is an impact driver?

An impact driver can be defined as a screwdriver hardware device. It is sometimes known as an impact wrench. They work with a robust and rotational force that baptizes them with the name “impact”.

Making 50 beats per second, an impact driver is particularly a useful gear for many people, especially those partaking in the construction line.

Impact driver comes in a variety of models, and it is up to you to decide the best one.

Rest assured, because of their speed and rotational power, these tools are what you need when you want to drive long bolts, nuts, and screws through a material. They are also a handy tool for drilling large holes.

What are some of the applications of an impact driver?

With an impact driver, you can adjust the screws in no time, and regardless of the fastener, you will not struggle. It can also be used to bore big holes that require enormous torque.

This tool is handy, and a must have for any person running a mechanic shop. The bolts and nuts used in vehicles are usually tightened tightly, and an average person cannot loosen them using a bare hand.

Therefore, an impact driver can be used to remove these nuts and bolts quickly and easily.

So between an impact driver and hammer drill, which one is more useful?

From the above section we have seen where and when each becomes useful, but to further help you understand more and make your decision, below are what makes them different.

What about their differences?

Although both drills and impact drivers have many related applications, they also have some differences.

As it is true that for most of the tasks, you could replace one for the other and get the job done with no problem, there will be cases where one will usually work better than the other.

The outcome will heavily rely on the project, your skills, and personal preferences of using that particular tool.

Differences in the application

First, note that the hammer drill and an impact driver sounds the same thing. However, when deciding between these two, you need to know their differences in application.

The hammer Drill is mainly used for drilling holes and attaching small screws, while the impact driver is used explicitly for screwing and does its best.

The principal purpose of the hammer drill is to drill holes in concrete, tile, rock, or wood surface. It is usually bigger than the impact wrench. This explains why an impact wrench is the most preferred in-home tasks.

Carrying a hammer drill around your home during construction tasks can make you tire fast compared to when working with a wrench.

However, if you need a tool for homework and DIY projects, the Cordless Drill becomes the right choice.

Differences in the way of working

A drill makes holes using a simple electric motor. When you press the shutter button, it will turn on the motor and rotate the bit. The Modern hammer drills come with speed trigger buttons, which you can use to set how faster the engine runs.

Some have settings that allow you to adjust the maximum speed that can fit the task at hand.

Impact drivers also come equipped with an electric motor that turns the bits. The engine is smaller with less torque, though often spinning faster.

However, an impact wrench has additional mechanisms – hammer and anvil – that turn on when more power is needed. These mechanisms add much, much more energy to the driver.

The hammers rotate in the engine at high speed. If they move fast enough, they hit the anvil. This gives the impact wrench a loud noise, along with force. The method also results in a lower return torque to the user’s wrist and hand, making it easier to use.

Some of the commonly asked questions

After furnishing you with the legitimate information about the differences between an impact driver and hammer drill, we also respond to some of the commonly asked questions from most of our readers and those wanting to purchase these two tools.

So, find some answers in the below section.

Between impact driver and hammer drill which one performs better?

Each tool has different areas of strengths. Not surprisingly, you would probably take the drill to make holes. Most drills come designed for better control at low speeds, so you can start drilling holes more accurately.

So in making your decision, first know the work or task in front of you.

Are mini-impact drivers as good as the bigger ones?

For small to medium applications, a mini-impact driver will just achieve the task as larger ones. Furthermore, they are much smaller and lighter, which means that they fit into narrower areas and experience less fatigue.

When it comes to high-performance applications, smaller drivers can probably do a bit of work, but the battery runs out quickly. Bigger impact drills are better suited for heavy work.

There we wrap up things concerning areas of application; the variances between the impacts drive and hammer drill. One thing to remind you is that, if you only need to drill many holes or require a lot of precision, a cordless drill is the best choice.

If you want to apply it primarily as a screwdriver, then a cordless impact driver is undoubtedly the winner.

However, if you buy the right tool for the job, you’ll find yourself surprised at how quickly things can be done. If you are satisfied with an impact wrench and think that you should get it, do so. For a hammer drill, do it also as per your preference.