You are here: Home / Blog / Differences Between a Miter Saw and a Circular Saw 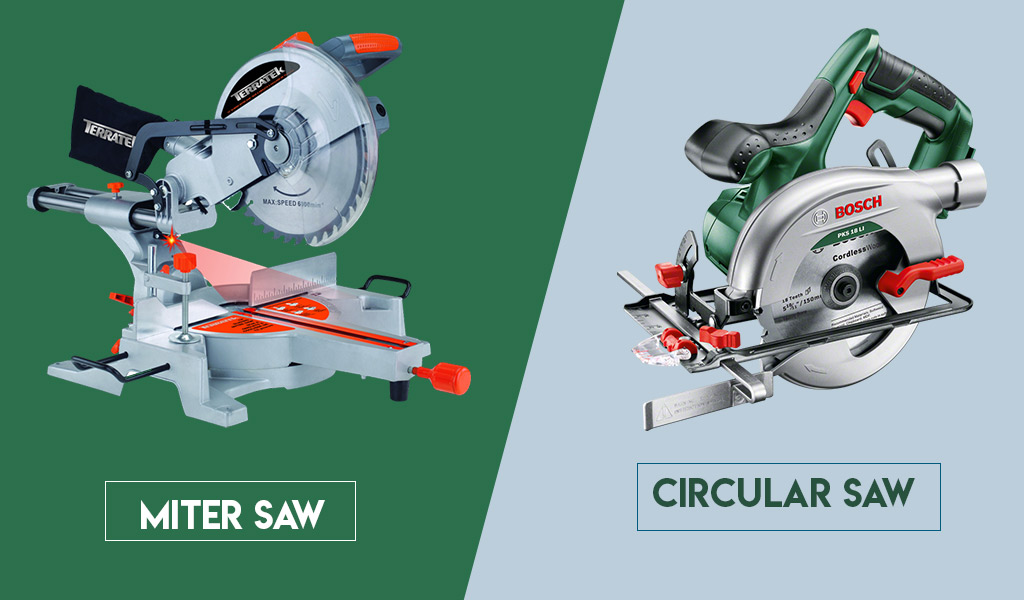 The question arises on whether you need both the miter and circular saw, or just one is useful over the other one!

This argument seems to rest on the fact that you really don’t need them both, and that the circular saw is preferable over the other.

Let’s look at each of these saws, their uses and where they are most suitably used or where one can be preferred over the other.

Probably, you’ll be able to make your own choice between the two, and decide which one best suits your situation.

What is a miter saw?

Also known as a drop saw, it is a cutting tool majorly useful for making crosscuts. It cuts materials by pulling a large backsaw or by use of circular back saw which is mounted on a board and moving at high speed.

What is a miter saw used for?

A miter saw is a great precision tool used to make the most common cuts, the 90-degree crosscuts. It can also be used to make angled miter cuts such as 45-degree cuts and when tilted, can make compound angle cuts too.

The miter saw is so precise because its blade is fixed on a robust arm on top of a heavy body. Cuts can, therefore, be done to match the width of the blade. Little bits can be shaved off for that perfect fit.

It is a safe-to-use saw as it has blade guards. Some added features may come with it such as sliding arms that can reach further and consequently cut more, and some tilt both ways to ease complicated tasks.

A miter saw is used for miters and cross cuts, and a compound saw can additionally make bevel cuts as it tilts on one or both sides.

The sliding compound saw has the additional sliding feature that increases the reach of cutting while the double-bevel sliding compound miter saw bevels on both sides in addition to sliding. Finally, the cordless sliding uses battery power but only bevels on one side.

What is a circular saw?

A circular saw is simply any saw set in circular form. In this case, it mostly relates to the handheld saw that is not mounted as opposed to a miter saw.

It also has an abrasive or toothed disc rotating around an arbor, and can be used for cutting different materials including wood, metal, and plastic based on the kind of blade in use.

What are the uses of a circular saw?

A circular saw can perform all the functions of a meter saw such as making bevel cuts, miter, as well as cross cuts. They, however, require additional tools and expertise such as a speed square for drawing the cut line and as an edge guide to make 90-degree angles and accurate miter cuts of different degrees.

To make bevel cuts, adjust the shoe of the circular saw by twisting the knob. Clamping the material, you are working on is essential as it will enable you to get the blade guard out until the beveling begins. With a circular saw, you can make rip cuts.

Differences between a miter saw and a circular saw

The major difference is that the miter saw is mounted while the circular saw is not. It is handheld.

With a miter saw, your hands are at a safer distance away from the cutting action, which gives you much more control than when you are using a circular saw.

Using a miter saw, one can adjust the angles in various directions making it easier to use, but while using the circular saw, you will need to set up jig or straight edges and measure the angle, which may end up being or not being accurate. A miter saw is suitable for novice users.

The circular saw wins when it comes to portability as it could fit even into a bag as it is so small. The miter saw, on the other hand, needs to be packed into a vehicle due to its size.

A miter saw comes with a ready sawing surface, but as for a circular saw, you will need to create your own workbench and clamps to hold down the material you are working on to avoid accidents on your hands.

A circular blade’s saw pulls the wood up against the saw. The bottom plate controls the cut. As for a miter saw, the blade has a negative hook, with the cutting action pushing the wood against the table and fence.

With a circular saw, you can do some ripping, which you shouldn’t try using a miter cut as it is dangerous and not designed to do rip cuts unless using a slide.

Listed below are some of the most common questions about the usage of a miter and circular saw that may better aid your understanding.

Is there a tool that can make all the cuts that a miter saw can make?

What does a miter saw cut?

A miter saw can cut wood and even metal with the right blade, mostly used for picture and door frames, window casing, and many others

Between a miter saw and a circular saw, which one is good for beginners?

A beginner will find the miter saw easier and safer to use if they need to cut other materials other than plywood or use it for tasks that require great precision and accuracy.

If you are looking to save a few dollars while doing a trial on a first project, you can try out the circular saw. A miter saw is much better though, due to its cutting precision, ease of use, and general safety.

If you plan to work on lumber, a miter saw would be best, and a circular saw will do for plywood. Moreover, if your work is more repetitive, involving the cutting of many pieces fast with robotic accuracy, the miter saw is the tool to go for.