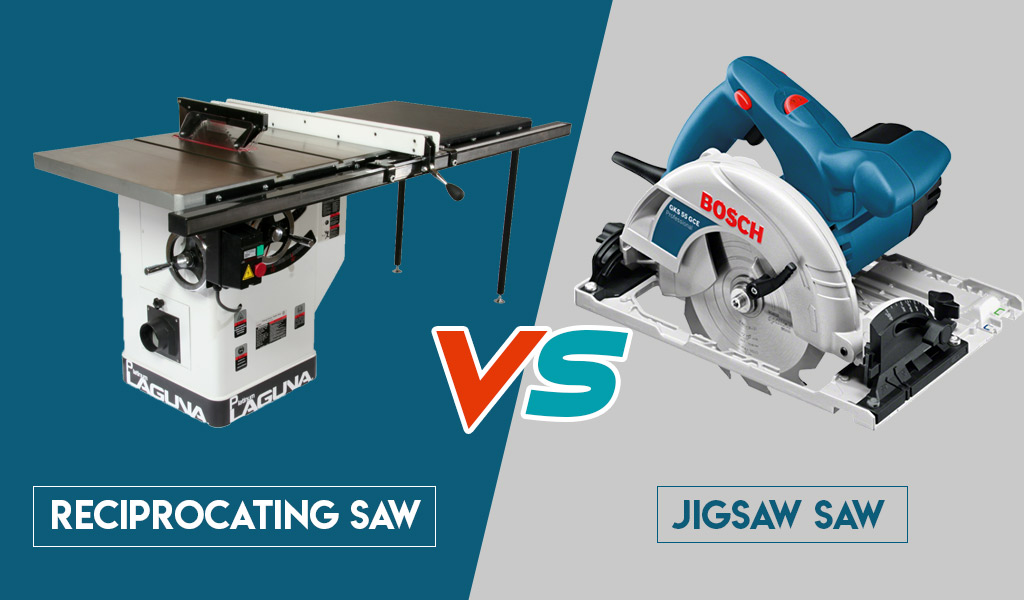 When you need a saw for your workshop to carry out those DIY cutting tasks, you may be asking yourself which one between a reciprocating tool and a jigsaw is best suited for your need.

While the two may be similar in some ways, there are major differences that will make you choose the tool you need with ease.

In this article, I have outlined the definition of each, the uses, and the differences that will make your decision-making process now and henceforth a walk in the park.

What is a reciprocating saw?

It is also known as a saw-all, sabre-saw, or reciprocal saw. It gets its name from the pull and push or back and forth short cutting stroke on the blade, but some can also be useful for a pendulum or orbital action.

As opposed to other saws, it can be directed into tight spaces because the blade is exposed, giving it the advantage of being fast and safer. It is also easier to control; when you are cutting from a ladder or in a place that is above your head.

It is usually known as the weapon of mass destruction by handymen as it is the rough-cutting, ultimate demolition tool because it is made to deliver massive power to the blade that enables it to effortlessly slice through materials. It is the go-to tool commonly used by plumbers, constructors, and electrical work.

Uses of a reciprocating saw

Different blades of the reciprocating saw are best suited to cut each of these materials, making it essential for you to use the right blade for the right job.

For metals, a hack-saw like and fine-toothed blade is suitable. For wood, use a coarse blade and an even coarser one when cutting through plaster. Toothless blades coated with tungsten carbide abrasive grit can be used to cut through ceramic tiles, cast stone, or wood.

The power capabilities of the reciprocating saw vary depending on the source of their power. If you are using a battery powered saw, you are more likely to be slowed down as the battery power decreases. Use of corded saws is recommended for consistency.

What is a jigsaw?

Also known as a scroll saw, it is actually a type of reciprocating blade that is similar to the reciprocating blade in that it‘s using the back and forth motion, has varying speeds depending on the material you intend to cut, as a foot found at the base of the blade, and it is handheld.

It is a machine saw having a fine blade for cutting irregular curved lines as well as complicated and decorative patterns and shapes in plastic, wood, ceramic, and even sheet metal.

It is a type of a reciprocating blade consisting of a handle, a motor, and a straight narrow blade that moves up and down.

What is a jigsaw used for?

A jigsaw is used for cutting curved and straight lines and when making holes.  It is best suited for ¾” thick hardwood, or 1.5” thick softwood. To make a cut, the base plate should be 90 degrees from the start of what you are cutting.

For circular and parallel lines, one may use a guide to assure accuracy. People usually drill a hole big enough for the jigsaw blade to fit into. It is also suited for other complex cuts including crosscuts, plunge cutting, beveling, and ripping.

Different types of jigsaw blades and handles are suited for different cutting needs, for example, one with a built-in laser line is suitable for straighter cuts, and a down stroke jigsaw blade for hard, deep surfaces such as countertops.

Handles also differ in comfort and grip, for example; the auxiliary handle with a knob-style suitable for scroll cuts as it offers greater precision and steering control.

It is useful in making holes in metals to fit in pipes or curves to fit on a wall. For cutting ceramic, you can use a carbide-grit jigsaw blade.

In terms of speed, use faster speed when cutting wood and slower speeds for metal and ceramic. To make a bevel cut, move the base to a 45-degree angle.

Differences between a reciprocating saw and a jigsaw

Why use a jigsaw instead of a reciprocating saw or vice versa?  There are instances when one tool is preferable to the other, depending on where you intend to use it. The following are the major differences;

A jigsaw can make intricate cuts while a reciprocating saw is not used to make intricate cuts. Additionally, reciprocal saws are made for straight, horizontal, multiple angle cuts, designed to tear away material fast, while the jigsaw is mostly suited for curved, and cross cuts.

There are however reciprocating saws made with sabre saw blades that can reciprocate the work of jigsaw blades.

A jigsaw cuts from a tabletop or a level surface, while you can use a reciprocating saw to cut above your head or when up on the ladder.

The jigsaw is a fine crafting tool for delicate work, while a reciprocating saw is a rough cutter used for major remodeling jobs such as tear downs and demolitions.

A jigsaw frame is mostly useful for cutting on countertops and around edges, while a reciprocating saw can be used for cutting door jams, pipe cutting, and cutting out window frames.

Apart from this, the blades of reciprocating saws are thicker, with a standard blade ranging from 7/8 inches wide and 0.062 inches thick, while the jigsaw being less strong, coming at ¼ inches deep and 1/32 inches thick.

Most of the types of blades are actually similar in material and teeth per inch, but tend to differ in speciality or use due to their thickness and robustness.

Reciprocating blades also come in a variety of lengths with shorter blades for cutting of hard materials and longer ones for more flexible cutting. As for the jigsaw, t-shank and u-shank blades are common, with t-shanks being popular as they are easily changeable without even using tools.

With its short-toothed blade, a jigsaw cuts while moving up and down. The robust Sawzall blades on the reciprocating blade speedily move back and forth for heavy cutting.

Most people still don’t seem to get the difference between a jigsaw and reciprocating saw. I have therefore outlined some three most asked questions concerning the two to aid better understanding.

A jigsaw can cut through wood, laminate, metal, ceramic, plastic, fibreglass, and plasterboard with the right type of blade of course. A reciprocating saw can cut through just about any material including all of the above and even harder materials such as tile, stone, and nails or materials with embedded nails.

Hopefully, the difference between the jigsaw and the reciprocating saw are now clear-cut, and you will be able to choose the saw that best suits the task that you want to carry out with ease.

It is advisable to have both of these tools with you; because you may need them for the different jobs, they are suited for. There is, therefore, no substitution when it comes to the question of whether the saws can be used interchangeably.