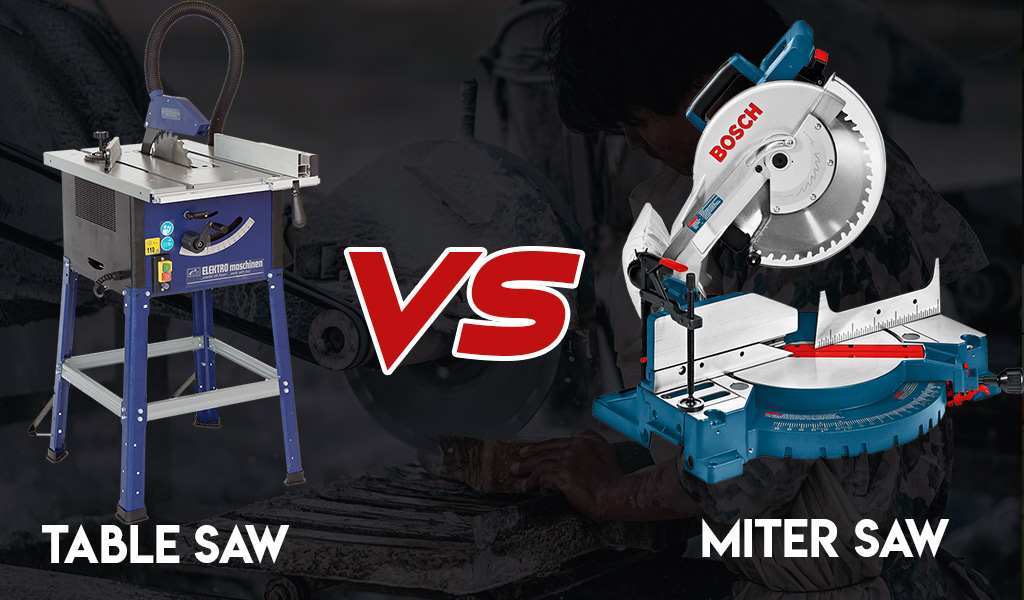 Wondering what you should buy first between the miter saw and table saw?

Well, the choice can be quite tricky if you are not sure what features you are looking at. However, worry-less as in this article, we are going to highlight some of the differences between table and miter saw.

By highlighting the differences, you will then choose what suits your needs best.

We will start by looking at each machine and its uses individually. We will then highlight the critical areas where they differ from each other.

Without squandering of time, let us go straight into it.

What is a table saw?

The table saw is a woodworking tool with a round saw blade running on the shaft that works using an electric motor. The sharp edge extends beyond the edge of a table, which serves as a support for the materials to be cut.

To control the cutting angle, the blades are tilted from one side to another.

It usually comes with a rip guide mounted on the table. When the guide is positioned, the wood is placed level with the guide and slid over the blade for cutting.

It can serve a wide purpose in cabinet working like filing cabinet and chest of drawers. This is especially advantageous if you are looking for the best way to maximize the space at your home or office, and where there is limited space that can’t accommodate long pieces and bulky furniture.

What are some of the uses of a table saw?

The table saw can be used for a variety of tasks, including cutting boards, forming crowns and even aligning curved or crooked boards.

However, if you want to use a table saw to make your wood straighter, you need to nail your wood to another board and cut it out by cutting it directly through the material.

What is a miter saw?

Miter saws are one of the most commonly used tools in the woodworking industry and with good reason. Their durability, portability, and accuracy render the miter saw a must-have for most artisans.

Miter saws with their design can produce fast and accurate cross-sections of a work-piece, typically for frame or molding applications. The work-piece is pressed against an angled guide that ensures a precise cutting angle during the cutting process.

The guide is usually set at an angle of 900 but can be reset to suit a variety of cuts and according to different needs.

While most miter saws are equipped with a miter index that makes it possible to change the cutting angle in one-degree increments precisely, most have capacities that allow for fast and accurate cutting strokes at common cutting angles such as 150, 300 and 450.

With the spinning of a powerful motor and the downward rotation of the circular saw, achieving precise cuts in this type of saw is not a problem.

What are some of the uses of a miter saw?

A miter saw can be applied on a piece of work to make crosscuts and miters that are accurate. It can be applied to create objects such as picture frame moldings and crown moldings and is able without much time to accurately cut a lot of boards of the same length.

It has been designed to make miter cut or angled cuts quickly. With this functionality, it can be used to replace the widespread radial arm saw that is used to make angled cuts.

This type of saw comes in many varieties. A widely known type is a compound sliding miter saw. This type of saw is just like a regular miter saw, but the only difference is that it can be tilted to either left or right side to achieve bevelled miter cuts.

What about their differences?

Mentioned below, let’s eye at the key differences between the table saw and miter saw.

It takes time to create sled or change the cutting angle when using the table saw. While for a miter saw you would easily and quickly change the angle of the cutting blades.

Another significant difference between miter saws and table saws is evident in the size of the stuff that each can cut.

So you could theoretically cut any wood size with a table saw, as long as you had enough space and enough people to push the piece over the blade.

Miter saws can only make cross sections. They cannot create longitudinal cuts or rips while the table saws can make both cross sections and rips leisurely.

Some of the commonly asked questions

After knowing some of the differences and areas of application for a table or miter saw, you might be having a series of questions. Lucky enough, we don’t leave you there as we have responded to some of the commonly asked questions in the below section. Please have a check.

Though sliding compound miter saw and stationary miter saw nearly performs the same task, we can’t conclude that they are the same.

What makes sliding meter saw different from its counterpart, the stationary compound meter saw, is that it is made with a guide (or rails) that allows you to push the saw blade forward and backward during the cutting process.

What is the main reason or purpose that I should buy the miter saw for?

While there are other tools that can achieve the same purpose as the miter saw, their level of accuracy and execution can be a doubt. For cutting miter or gasps, a miter saw should be number one on the priority list.

Which one should I buy first?

If you are in the market for your first saw and wondering if you should get a miter or a table, I will just let you know that you should opt for a table saw. Though both of them are versatile tools, all that a miter saw can perform can also be performed by a table saw. So table saw is a miter saw in itself.

To conclude, I say that a table saw should be number one on your priority list as long as you take the time to investigate and make sure that the model you buy meets all of your needs.

You’ll quickly appreciate the priceless work the table saws can do. Furthermore, the table saw is independent of the size of the material to be cut.

However, if you have enough space and money, why not include a miter saw in your workshop?

And if you plan to work out frames and do much of accurate cross-cutting of relatively small material, a miter saw is an excellent addition and will make your life much more comfortable. Remember, on the best quality; both tools will be an appropriate investment.